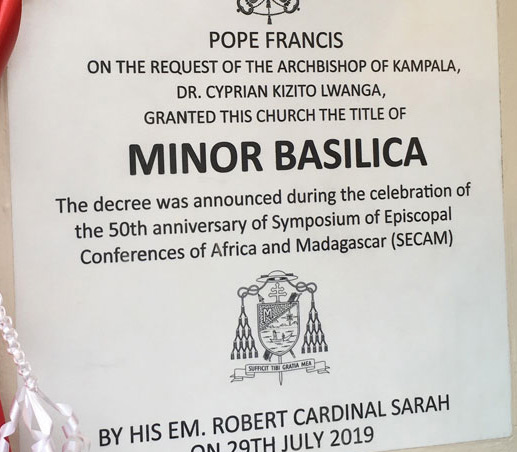 On Monday, July 29, 2019, His Eminence Robert Cardinal SARAH, Prefect of the Congregation for Divine Worship and the Discipline of the Sacraments, elevated the Franciscan Church of the Martyrs of Uganda in Kampala-Munyonyo to the dignity of a Minor Basilica.

Guests taking part in the celebration included the Most Reverend Louis Bianco, Apostolic Nuncio of Uganda, the Most Reverend Kizito LWANGA, Metropolitan Archbishop of Kampala and bishops and archbishops from Angola, Chad, the Democratic Republic of Congo, Gabon, Ghana, Guinea, Malawi, Nigeria and Togo. Others attending included the Assistant General for the African Federation of Conventual Franciscans (AFCOF) Friar Anthony BEZO KUTIERO, the Minister Provincial of the Province of St. Anthony and Bl. James of Strepar in Poland (Cracow), Friar Marian GOŁĄB and the Vice President of the Republic of Uganda, Mr. Edward Kiwanuka SSEKANDI.
This was an unprecedented event. In 2013, the Conventual Franciscans of Cracow visited the place where the first Ugandan Martyrs of the nineteenth century had been condemned and put to death. Two years later, the friars began to build a church on the site, a church that Pope Francis would later visit during his apostolic visit to Uganda. Then, in 2017, His Eminence, Fernando Cardinal FILONI, Prefect of the Congregation for the Evangelization of Peoples, consecrated the church.
The Pope awards the honorary title of Minor Basilica to churches that stand out for their liturgical value, pilgrimages and ministry. The Shrine of Munyonyo is built on the site where, in 1880, King Mwanga II decided to exterminate followers of Christ. He condemned them and had the first of them put to death at this location. The Shrine is chiefly a center for pilgrimages and pastoral ministry. It is also a place for religious formation and the site of the postulancy program.